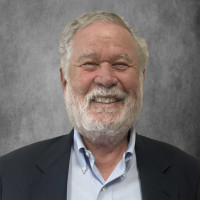 Ted Kosloff was born in Philadelphia and has lived there his whole life. In 1964 he graduated from Penn State University and joined the family business on a full time basis. He married Phyllis Yavne in December of that same year.

This family business, Roosevelt Paper Company, was started by Ted’s father, Irv, in 1932. Over the years, the company grew into one of the nation’s leading merchant/converters of printing and packaging paper

In 1976, Ted was named President of Roosevelt Paper Company, overseeing its expansion into branch operations in suburban Chicago and Cincinnati and in 1998 moving its headquarters to Mt Laurel, New Jersey. One of the first things Ted did as president was to sell the 76ers basketball franchise so that he could focus his attention on running Roosevelt. His father bought the team in 1963 and then merged them into Roosevelt after his partner died in 1965. Ted remained President until 2002 when he was succeeded by his son, David, representing the third generation of family ownership. Ted maintains his long-standing relationships with customers and mills and remains an active, working member of the company.

Ted actively serves on the board of the Philadelphia Community Kollel where he was President for 3 years and is also head of the trustees committee for Kosloff Torah Academy for Girls.

← Back to Our Staff
Continue to site without claiming my offer