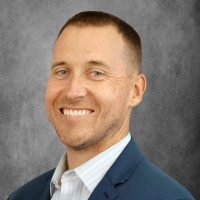 After graduating college, Donald spent some time with the financial industry before arriving at Roosevelt in 2006 as part of the inside sales team in Kentucky. He worked as an outside sales rep and sales manager before becoming division manager in 2016.

“I've found nothing is more satisfying at Roosevelt than working as a team to successfully build long term partnerships with our customers and suppliers,” Donald says.

He notes that his life outside the office is just as exciting as his workday, as he and his wife Jody try to keep up with their six kids, which includes – believe it or not – two sets of twins. Aside from coaching his children’s softball, baseball and basketball teams, he tries to get some time on the golf course and spend quality time with friends and family.

← Back to Our Staff
Continue to site without claiming my offer